In 2013 I met a French clown in a café in Lhasa. I was in a restaurant called “Tashi 2” when I heard a voice switching effortlessly between French, English, and Tibetan. Marion is a juggler, translator, and one of three westerners with a permit to live in Lhasa. She’d already summited Everest twice, one trip financed by a French bank (Milestone Capital). The bank wanted a photo of its logo at the highest point in the world.

In 2014 Marion and I and a small group took a bus from Kathmandu to Lambagar and walked north to Lapchi, over very challenging terrain. After a hard day trekking I asked Namgyal, our guide, if we’d ever hike to a high enough altitude to leave the leeches behind. He said, “Yes, tomorrow. Tomorrow we go higher and leave the black leeches behind.” He paused. “But then we walk through the yellow leech area, higher up. They drop from the trees.”

Marion chimed in, “Yes, so sorry, monsoon is not the best season for this, but it was the only time we all had free.” 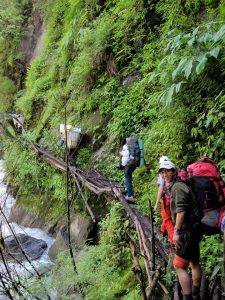 After arriving in Lapchi my more energetic traveling companions took a day to climb to remote retreat caves. I spent that day wandering around the lower part of the mountain. I’d brought recordings of loops and beds of sound I'd made in my studio, thinking that if I walked in the spectacular landscape and listened without much agenda that the sounds could be encouraged to assemble themselves.

When I played around with the music back in Minnesota the images returned: --here is a crevasse in Lapchi, here is a stupa--

We walked back to Lambagar and then east, to Bedung. We bivouacked in the village of Na. From there we made two higher camps and failed to make a technical ascent of Mt. Ramdung. 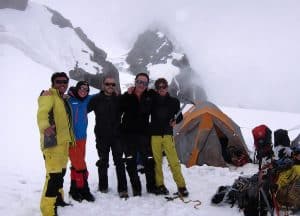 They let me hold the ice axe.

Back in Minnesota I'd sometimes go to a local coffee shop with my laptop, headphones, and rough mixes to work. I’d edit with the coffee shop’s patrons in view. I’d assemble sound prodded vaguely by what I saw and heard.

Some of the titles to the songs and pieces of sound were from overheard conversations. They were just placeholder names, bookmarks, Post-it® notes. Over time, the placeholder titles gained some traction and acquired a ghostly sort of existence. They grew into significant little song-music-people. They began to exert influence over musical direction. Back in the studio, it seemed perfectly sane to ask, “Is it right that the song-person Emily should have a lacey high piano gong cycle in this section? Is it ‘right?’ Is it Emily?”

Rewind to 2009. I gave my sister an immune system transplant. That story is here.

My sister signed up for a clinical trial at MD Anderson Medical Center in Houston, Texas. My blood type, along with its complicated antigenic makeup was a good match. They killed her immune system with chemotherapy, pumped me up with Neupogen, whirled my blood in a centrifuge, and transplanted Steve into Ellen. 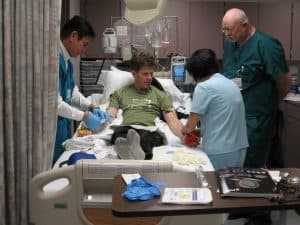 I don’t use much EQ or compression. The trade-off: the music can sound a little dull, like the speakers are wrapped in muslin. I tried jacking up the treble, like everyone seems to do, and it sounded screechy and annoying.

There are two microphones in my studio left set up for acoustic guitar, a Mojave and a Neuman   They haven’t moved in years. Using an un-matched pair seemed like the right thing to do. The Mojave worked well at the 12-string’s soundhole, the Neuman made its home looking at the 12th fret.

I used to call up Willie Murphy when I had technical programs with the software we both used. We usually end up talking for an hour or so, typically about the music business or Dave Ray, and when I hung up I realize I forgot what I called him for.

I have a Martin 12-string that my father gave to me. I came home from college for a winter break sometime around 1978 and saw the guitar in its case, propped up against the shoe rack in the front hall of our house. I stamped the snow off my boots and said, gesturing to the guitar case, “Hey, you should let me take that back with me!” I was kidding. He leaned over the railing upstairs with his hands clasped and didn’t say anything.

Ten days later I was putting on my shoes, getting ready to leave, the guitar in the same place. My dad was leaning over the railing again, hands clasped. I stood up. He gestured at the guitar with his chin and said, “Take it.”

It’s an old guitar, now. It has a peculiar internal resonance, as though it has a small concert hall inside of it. I try to bring that quality out by stringing the guitar in double courses. In other words, instead of stringing the 4 lower strings with octave courses, I string them in unison. It makes it a lot harder to play, but with double courses I can draw out overtones if I’m willing to really physically engage the strings.

The frets on my guitar are worn almost flat. There are some tiny intonation issues and places where strings buzz against frets. I took the twelve-string to Ron at St. Paul Guitar repair. He looked the guitar over. He picked up the guitar and sighted down the fretboard. He said, “The frets are flat. There might be some buzzing or intonation issues. Do you like the way it sounds?” I said, “I love the way it sounds.” He handed the guitar back over the counter to me and said, “Then I won’t fix it for you.”

I try to play the guitar for one or two hours before recording. Something needs warming up. Maybe the back of the twelve-string needs to be physically warmed up, or my fingertips need a certain pliability. At some point the guitar settles down and the little concert hall inside opens for business.

I like the physicality of playing 12-string. I don’t use a pick. If I’m drifting off to sleep at night and feel my fingertips throbbing I know I had a good day.

I bought a piano, a good one. I took piano lessons at MacPhail Music School with Susana Pinto.

Susana is from Portugal. She had me learn scales, Bach’s “Inventions” (impossible) and Bartok’s “Mikrocosmos” (possible). She’d listen with her arms folded while I played that week’s lesson. Sometimes she would wait a moment after I’d finished and say, “Steve, I am not convinced.” More study. Susana taught me about voicings. I’d never thought about voicings: piano, guitar, or anything.

I stopped taking lessons but I still heard Susana. After listening to a mix or a new piece of music I’d recorded I’d sometimes hear Susana’s voice behind me, to the right, saying, “Steve, I am not convinced.”

The piano is a sort of gamelan. A row of gongs. Gong cycles were part of the sonic landscape when I worked in Bali and Java. In performances of Wayang Kulit everyone could feel the big gong coming, the one that marks the beginning of a new cycle. It felt like the crowd exhaled at the same moment that gong was hit. I could use the piano like a row of gongs and let it cycle through the structure of a piece of music.

The small concert hall in the guitar encouraged me to seek out a large concert hall to mix the album in. The Macalaster College music department kindly let me bivouac in their concert hall for an evening. I set up two pairs of mics: one in the center of the hall, and one pair in back. It worked well to allow a room’s ambience to settle around the piano and percussion. The natural acoustics of the hall helped the guitar settle into the piano. 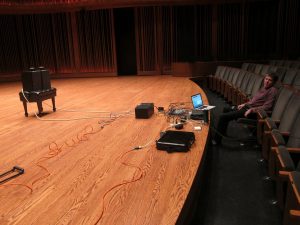 Spencer came to visit and brought a book of palindromes, “I Love Me Vol. I.”

There were some good candidates for titles: Aerate Wet Area, Ark Okra, Dracula Valu-card, Noise Lesion, Pull Up if I Pull Up, Retro Porter, I Did, Did I, Enrober Reborne, and Señor Drones.

I ran the titles past Michelle Kinney when she came over to record cello and drone parts. She said, “Titles are too Frank Zappy-y.” What to do? I’d run out of the names of Sanskrit charnel grounds, and proper names seemed too cute by half. I submitted two sets of titles to ECM and tried to forget about it.

I still think in terms of albums, even in terms of album sides. I lined up the songs, left to right, and worked with the running order until it seemed to hang together or make some sort of story. I played the ending of every song with the beginning of every other song until a plot started to reveal itself (this is what happens when you work alone—musical plots reveal themselves). Here’s how it ends: The kids went to college. Their parents were sad for a little while, then fine. Ellen lived, and is in remission. Grandma died. Grandpa was sad. Everyone else lived as happily ever after as could be expected.