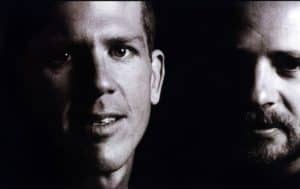 (When “Big Map” came out I got a call from a writer who was both a music fan and writer for a cartographic periodical. It was a fun interview.)

Big Map Idea–guitarist Steve Tibbetts’ fifth ECM release transports this listener to remote, unfamiliar landscapes. Tibbetts and his long-time collaborator, percussionist Marc Anderson, often discover the kernel of a new composition in a fragment of “found sound” recorded during their travels. The exotic triptych “Three Letters,” for instance, is informed by snippets of festivities recorded at a Hindu shrine at Pharpang, Nepal. Says Tibbetts, “These little pieces of sound make you realize you’re far from home.”

Tibbetts has remarked that, “Musicians may be overly sensitive to their environment.” !n a recent interview I asked if he and Anderson work consciously to evoke images of particular places in their music. He suggested that it tends rather to be “the sense of place that evokes a song.” Forced to categorize, he calls his work “folk music.” “I am an untrained musician and a ‘folk’ as well.” But not all of Tibbetts’ recordings rely principally on the delicate voices of acoustic instruments. A previous release, Exploded View is a stormy hour about which Tibbetts has remarked, “A lot of emotional upheaval and traveling created that record.”   Exploded View is remarkable for Claudia Schmidt’s soaring soprano, but especially for Tibbetts’ searing electric guitars that rage down through roiling clouds like Shiva, come to lay the world to waste.

So what is the big map idea?

According to Anderson, titles are always an afterthought for the duo, and ”Big Map ldea” was “a title of Steve’s that in the end we both rejected.” An ECM executive selected it from a list of prospective titles.

Meanwhile, Tibbetts and Anderson are embarked on a new exploration. Asked where his forthcoming music is headed, Tibbetts said, “1 don’t know. I don’t want to know.” Tibbetts’ art springs from sensitivity to his instruments and surroundings, not from premeditation. A plan or map can be a hindrance to the visceral appreciation of some landscapes. Yet Tibbetts does admit a fondness for cartography: “My favorite Christmas gift last year was a Times ‘Atlas of the World.’”