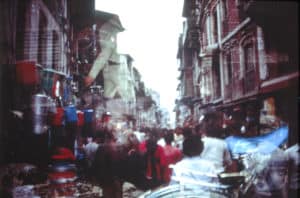 There are very few guitarists out there with an immediately recognizable style, but Steve Tibbetts is one of them. And these are what I think of as the defining characteristics of his approach: an aversion to pulse, and a tendency to take note-bending one step further into genuine melisma. Put those two tendencies together, and what you get is a floating cloud of sound that unpredictably delights when a note suddenly (but subtly) blossoms into three or four others.

On his latest, Tibbetts is joined by percussionist Marc Anderson and cellist Michelle Kinney–but don’t be listening for beats (there are none) or for anything that sounds particularly like a cello (Kinney mostly creates drones that fade in and out of the mix so subtly that they often sound like echoes of the guitar). This is music that moves in irregular waves and to which it makes the most sense simply to abandon yourself. Luxuriate in the pulselessness. Listen to what Tibbetts is doing–it’s always interesting and very often technically impressive–but don’t let it distract you from the gestalt.