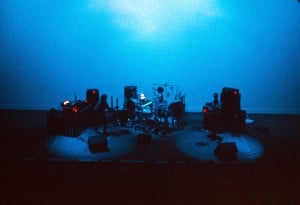 Steve Tibbetts seems intent on producing music that doesn’t have a name.

It ain’t Third Stream, though he mixes lots of acoustic guitar and wordless vocals a la Steve Reich in his typically lengthy structures.  It ain’t New Age, because it’s got balls and ideas.  It ain’t jazz, though it’s shot through with mode-based improvisation and relies on a jazz-style sensibility.  It ain’t rock, though his electric guitar often sounds like a renegade from the College of Musical Knowledge, post-grad division, Jimi Hendrix Studies.  Carrying the electric innovations of that unmatched professor to certain of their logical conclusions, Tibbetts paints with sound: notes and their harmonic relationships often seem less important than the tones through which they are conveyed.

He’s not alone in thinking something like that.  Besides Tibbetts, there are lots of other pickers exploring this fertile region-and it seems plenty large enough to support many different, even conflicting, concepts.  Among the primary pioneers are Adrian Belew, Eugene Chadbourne, Ronnie Drayton, Bill Frisell, Fred Frith, Jody Harris, Henry Kaiser, Robert Quine, and Vernon Reid.  What these players all share with Tibbetts is an ironic ’80s sensibility that plays with tradition, a developed-if skewed-sense of musical structure that gloms together disparate elements literally from around the globe, and a fondness for raging guitar explosions.

All of which gives you some context for Exploded View.  Take another look now at the instruments listed above, and you may even be able to imagine a rudimentary sonic picture of the kinds of contrasts, sometimes witty, sometimes violent, that Tibbetts engineers on this latest effort.  Better yet, of course, get it and stretch your ears while you hear for yourself.

Steve Tibbetts rides a wide variety of percussion and rhythms–congas, steel drums tablas–and he often overlays wordless vocals as a backdrop to his ax-work, which veers from exploding raunch to acoustic filigrees.  Like label-mate David Torn, Tibbetts seems intent on cannibalizing (in the best sense) musical parts from anywhere imaginable.

Bits of kalimba ring out next to an electric guitar that creaks like an un-oiled door (“Drawing Down the Moon”).  Jagged ax growls rip through circling and intensifying percussion and vocals to peak in an overdrive cloud, then yield to Eastern-evoking acoustic solos (“The X Festival”).  Cowbells crescendo into industrial-strength drumming behind multi-tracked acoustics that buzz and rattle as distant tape loops whimper (“Metal Summer”).  A melody reminiscent of an early-morning Moslem chant bursts into percussion crosstalk and spasms of scraping before closing out with some acoustic warbling (“Assembly Field”).

It’s a weird and fascinating blend that doesn’t have a label–yet.  What it does have is a voice and power of its own.