Family email from India and Nepal, 2010

It's time to wind this little story up.

I moved from the Döndrub hotel up to my friends' place on Mahankal road. Sukhi and Peter live in Germany for most of the year and kindly offered me the use of their flat. Marc and I stayed there in 2002 and recorded Choying in the living room for the CD "Selwa." The flat came with a didi, which is Nepali for "big sister" or "maid." Our didi's name was Choying as well. She wasn't there very often, but had a small restaurant on a side street in Boudha that I stopped in occasionally. She'd make momos (a Tibetan dumpling) for me and we'd chat in my fractured Tibetan while I gagged on her cooking.

I spent the days wandering around Kathmandu on what seemed to be a never-ending series of inane errands: getting t-shirts for the kids, having shirts tailored for myself, getting books and various practice implements for people back home. One friend said she'd "really like it if I could find a human skull cup" for her. I actually did know a place that used to sell them in Thamel. I wandered around until I found the place, went into the cluttered and very dark shop, and saw the same proprietor I remembered from 1985. He seemed to have become younger, somehow. I started talking with him and realized it was his son. He told me his father had died and that implements made from human bones were no longer for sale in Nepal, but he could get me a "nice skull" for about $500. I declined.

I took some hikes with Justin Kelly and Gail MacDonald. We walked up to Nagi Gompa, where the Naropa group used to study, and I ran into Sita, a nun who had come with us on our first tour in 1998. She was (come to think of it) the only nun we'd imported to the west who hadn't jumped her visa and disappeared into Brooklyn or Munich or somewhere. One out of about six. She'd come back to Nepal and gone into a traditional 3-year retreat. I'll enclose a photo of us standing in the mist up at Nagi, and a photo of us in '98.

That's us playing at the Barrymore in Madison with Sita to the far left. The nun in the middle, Sonam, bailed out in New York and now lives in Flatbush. Presumably not a nun.

Here is Sita up at Nagi Gompa. She'd completed her 3-year retreat. You could tell; she had that vibe. 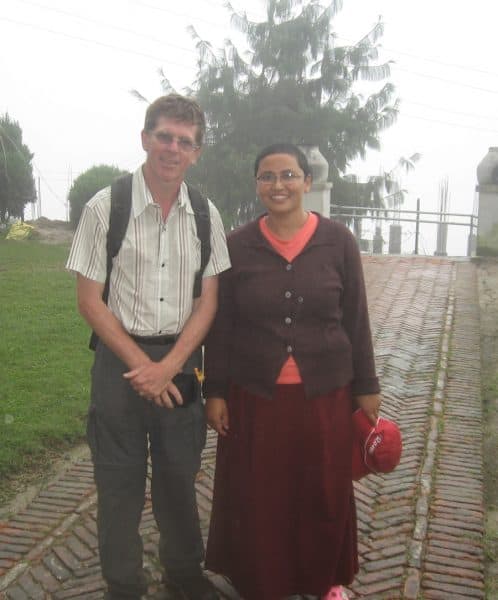 Texting was the preferred method of communication in Boudhanath. Justin would text me asking about dinner, I'd text Gail, we'd confirm, and then we'd meet at a restaurant called Flavours. Choying texted me and suggested that I come out to her school in Pharping to see the end-of-quarter presentations. I texted back that I would like to, and asked if Gail and Justin could come. She agreed. We settled on a time. The next day Justin and I walked down together to the street to meet her. Justin and I were actually not all that late in meeting her at the Boudha gate, but on the way down she texted me twice, and Justin once. My phone would vibrate, and I'd pull it out of my pocket to see a message like "where r u? waiting waiting" on the screen. I sort of steeled myself for our meeting. It seemed highly likely that our usual mode of conflict would kick in.

We got to the gate and saw Choying parked across the busy street. She beeped her horn. We crossed and got in. It was wonderful to see her. She looked exactly the same as she did in '93 when I met her. She drives like an insane New York City cabbie, weaving in and out of traffic. This is quite a feat in Kathmandu since traffic includes cows, bullock carts, water buffalos, motorcycles, humans, bicycles, and huge trucks.

We drove to Pharping, a small village in the south part of the Kathmandu valley. Pharping is a special place. Lots of great meditators did retreat here. When we recorded Choying in 2002 we did some recording in a cave famously inhabited by Padmasambhava before he headed to Tibet to tame demons causing trouble at Samye.

Choying's school was impressive. Amazing, actually. Four stories tall. She'd done it. I remembered a letter from her after our first tour in '98--she'd realized that there was a chance that she could make some real money on the road and fulfill her dream of creating a school for young girls in difficult circumstances. She told me that she wanted to do more tours. At the time, I thought she was probably more interested in getting a jeep, or a flat somewhere in Kathmandu. But I was wrong:  she'd done exactly what she said she was going to do. She had smashed through a lot of barriers in the process of creating her school: religious, cultural, patriarchal, the last one being the most impressive. She is extremely smart, tough, motivated.

There are lots of people in the world but there is only one Choying.

We walked up and saw that a group of young nuns were there to greet us with khatas, (ceremonial scarves). They draped the khatas around our necks. Choying turned to Gail and Justin and rapped her fist against the brick wall of the school. She said, "This building was made with music." We had a brief tour of the facilities (dorms, classrooms, dining hall, all spotless) and were brought into a room where about 50 young nuns were waiting for us. I don't know that they were actually nuns, in terms of having taken formal vows, but they were garbed and shaven-headed. Therefore: nuns. 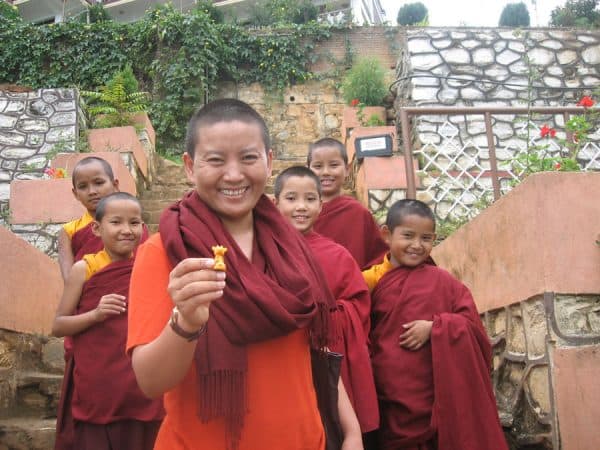 It was the end of the semester grade presentations. That's what Choying wanted me there for. Choying positioned me in front of the nuns, next to the English and science teachers. Choying explained that each student would come up and get their grades and a small gift. My job was to hand out the little gifts. Choying would hand out the grades and a khata. "But first," Choying said, "We are here today to thank Mr. Steve Tibbetts for this school. It is because of mister Steve that we have this building and these teachers and your food and a place for you to live. So now we will applaud for Mr. Steve." And they did. They applauded and shouted for a long time. It was quite a moment. I turned very red. I was glad Gail and Justin were there to be my witnesses. 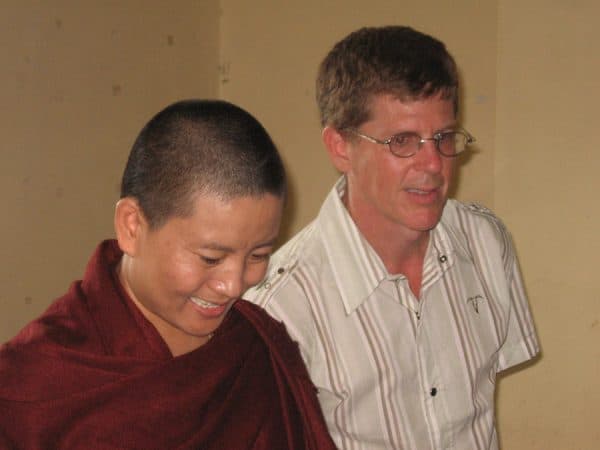 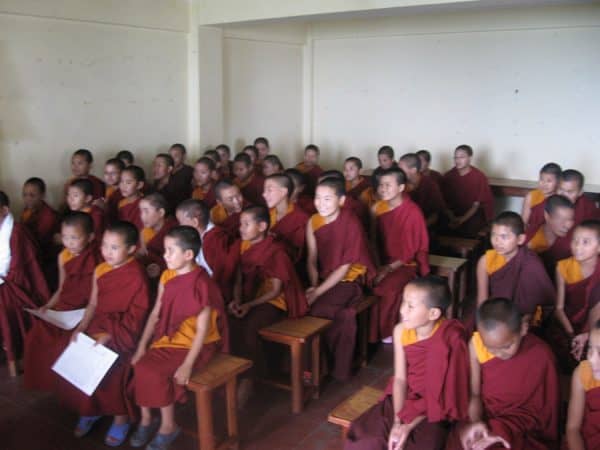 We handed out grades and gifts. Choying would whisper a quick backstory as each child came up. "This one is from the far west of Nepal, abandoned at a bus station." "This one lost her hand in a fire, so please give the gift to her left hand." "This girl was beaten by her father so her mother killed him and she is in jail now." Choying would briefly read out the grades of each girl. If the grades were not good, the girl would stand in front of Choying, eyes to the floor while Choying spoke sternly to her. 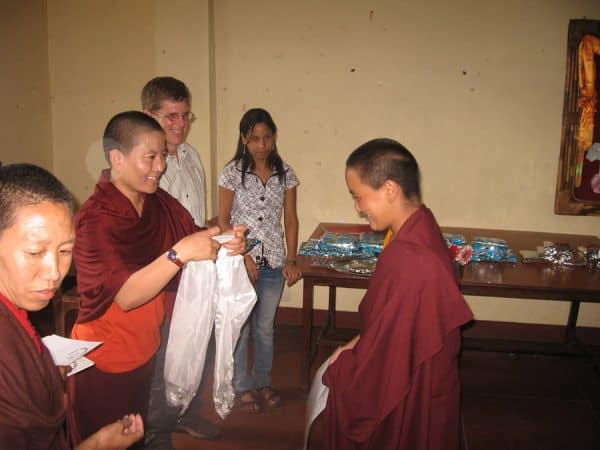 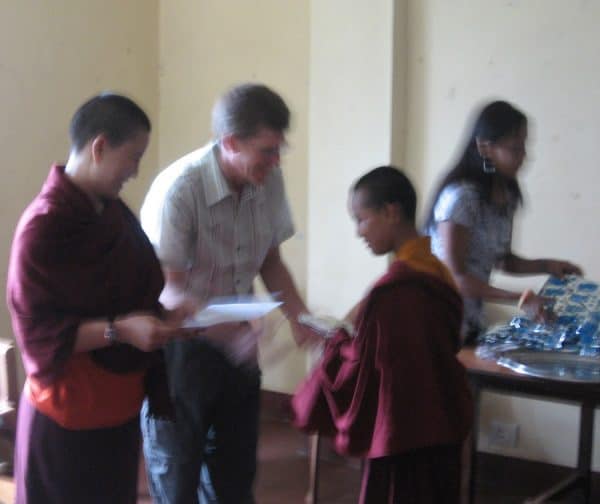 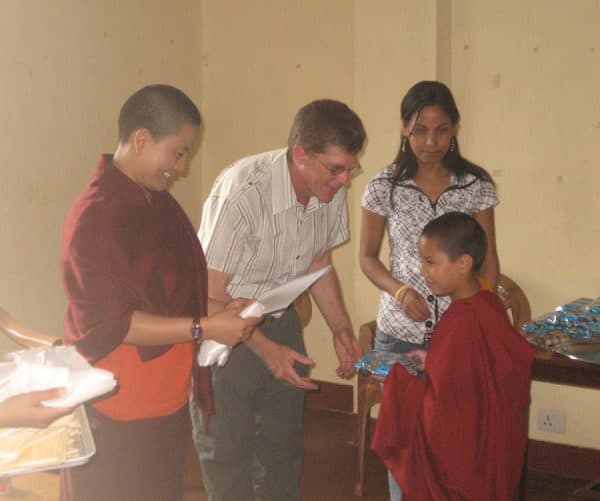 It was a good day. Two days later I was asked by Choying to attend another function, this one at the Radisson Hotel in the diplomatic quarter of Kathmandu. The occasion was the retirement party of the Canadian Ambassador. I'll tell you about that in the next email, and then I'll be on my way home.