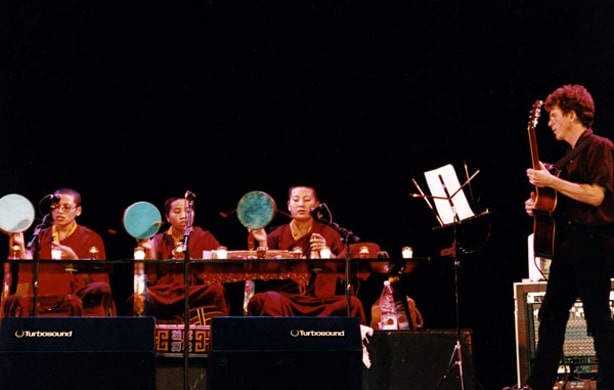 At the Barrymore Theater, Tibbetts and his nuns open a window onto bliss

Madison-bred guitarist Steve Tibbetts has always had his admirers.

On self-produced discs from the mid-­'70s and modestly budgeted efforts for the ECM label, he displayed a talent for mixing progressive jazz-rock guitar with Eastern rhythms and modes.

However, nothing in his long career really prepared his admirers for Chö, his deft 1997 collabo­ration with the Tibetan Buddhist nun Choy­ing Drolma and a choir of nuns from her Kat­mandu monastery.  The title of the set (which translates as "cutting") refers to a body of ritual practice in which the nuns en­deavor to sever their attachment to the self. Their chants aren't really intended for the concert hall, and it's to Tibbetts' credit that he's refrained from turning the nuns' prayers into secular grooves.  Last Sunday at the Barrymore Theatre, Tibbetts and his longtime percussionist, Marc Anderson, continued to display admirable restraint as they backed Choying Drolma and two other nuns who'd traveled from Nepal to tour Chö.

Dressed simply in saffron robes, the close­ly shorn nuns sat between the musicians on a raised platform.  Before them stood a row of small votive candles that flickered each time they accompanied themselves with the hand bells and small, brightly colored drums.

Choying Drolma's full, rather deep voice really has very little in common with the gruff, horripilating drones of Buddhist monks, and in concert she conveyed a plain­tive innocence that's only hinted at on Tib­betts' recordings.  On most tunes she sang a quavering lead line, then pulled back into the music as Tibbetts and Anderson mapped out ambient textures that occasionally riffed off her melody. Each time she and her sister nuns picked up their bells and tam­bors, the music took on a stately quality that at points was reminiscent of Chinese court music.

Even without the benefit of the choral backing that appears on the disc, the nuns' music had considerable spiritual heft.  The lulling cadences of "Ngani Tröma Parts 1 & 2" were particularly affecting, and left am­ple room for Anderson to provide global ac­cents with his tablas and tree of shiny gongs.  There was no encore, and, frankly, none was needed.  The window onto bliss that Tibbetts, Anderson and the nuns offered was treat enough. 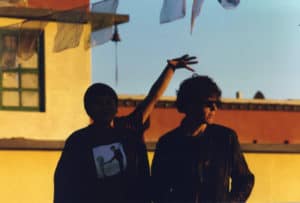 Madison-bred guitarist Steve tibbetts first heard the Tibetan Buddhist songs of realization ("termas") and contemplative chants that make up the core of this album by accident.  He was working in Nepal, and one evening someone suggested that he should listen to the nun who was singing in a shrine room at the small monastery where he'd been staying.  Tibbetts was immediately captivated by the transcendent beauty of the music he heard, and the next year returned to Nepal to record singer Choying Drolma and the other Buddhist nuns who appear on Cho.

Back in the States, he added guitar, bouzouki, percussion, and a variety of other instruments to their songs, taking care not to obscure the religious, at times celebratory, quality of the music.  The global fusion disc that resulted from his efforts is mesmerizing, but not in a chill-out kind of way.  Even Choying Dolma's quietest solo pieces radiate a calm self-confidence, and Tibbetts deflects any notion that this is a New Age album by placing several of the nuns' quavering chants in stately musical settings.