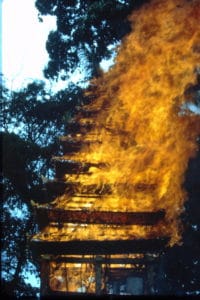 Steve Tibbetts’ name is rarely mentioned in discussions of Madison music. But it should be.

A native who moved on to the Twin Cities more than 20 years ago, Tibbetts may be the best electric guitarist the city has ever produced. He’s certainly been the least predictable. He’s also one of the only Midwestern practitioners of world/fusion music who went on to blast inspired washes of feedback to the accompaniment of tablas and layers of non-Western musical samples.

Having crossed into the murky waters of midlife, Tibbetts shows no sign of artistic regression or stasis. He had a critical and NPR-endorsed hit a few years back with Chö, a marvelously balanced collaboration with the Buddhist nun Choying Drolma, whose singing and chanting gave his already ethere­al music a spiritual grace. (The Madison performance of that material at the Barry­more Theatre should have drawn a much big­ger crowd.) More discs like the mesmerizing Chö surely would have made Tibbetts a world music–and perhaps New Age–franchise.

But the curly-haired, bespectacled guita­rist resisted that temptation. While his first offering on the ECM label in eight years, A Man About a Horse, utilizes Eastern percus­sion, it’s very much a guitar player’s disc. It’s so packed with the sort of distorted-yet-molten chording and aqueous, blues-free sin­gle-note figures that are the hallmarks of prog icon Robert Fripp’s most creative work.  Hardly the way to go if you’re looking to hook the ears of mellowing baby boomers and serious followers of things Buddhist.    The album begins slowly with the ringing acoustic steel-string guitars of “Lupra,” which recalls another progressive ECM picker, Ralph Towner, as well as Towner’s ’70s East-meets­-West jazz group Oregon.  But this is simply the quiet before the storm. The CD takes off when a series of related tracks called “Red Temple,” “Black Temple” and “Burning Temple” intro­duce a percussive mix of anxious, nearly aton­al rock-leaning guitar, clanging sequences of sampled gongs and a full Balinese gamelan, with additional beats played by Tibbetts’ favorite hand drummer, Marc Anderson. These tracks are far more gutsy and aggres­sive than the usual New Age and world-trance flights into India, Indonesia and Tibet. But ultimately they’re also meditative, much in the same way a Buddhist orchestra’s grunt­ing horns and roughly hammered rhythmic patterns take on a lulling quality after the son­ic shock diminishes.

Although, to be frank, much more than a casual listen is required before this transformative quality of the CD becomes evident.   Tibbetts injured one of his wrists while working on his house, and he’d decided to go for broke in the studio during the month or so before he went in for major surgery.  You can hear that unfettered attitude in his guitar playing, of course; you can also hear it in the way he crafts the dramatic arc of A Man About a Horse as a whole. And yet there’s something else at work here that isn’t so eas­ily pinpointed. Is it the synergies that have emerged from a life spent perfecting music that deviates from all popular genres? The result of multiple stays in South and East Asia and a serious inquiry into Buddhist disci­pline? Divine inspiration?  Who can say? Tib­betts is one of this city’s great, under-appre­ciated native sons precisely because he deals in a potent magic that’s not easily understood. Keep an ear cocked to his development, Madi­son; he’s already proved that he’s an artist of a very high caliber.