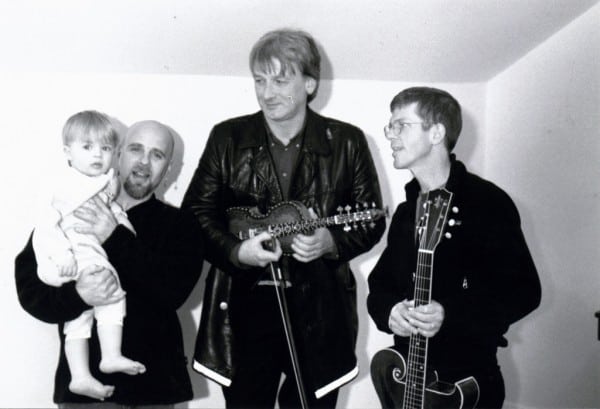 The process of crossing over, culturally, from West to East, can be a journey fraught with peril, or at least questionable intent and results.  But when it works, when musical ideas from disparate places find a common ground, the results can be truly ear-opening.  Such successful mergers can exemplify the truism--verging on cliché--that music is the only genuine universal language.

That idea springs to mind while listening to the latest project from the category-defying tone poet guitarist Steve Tibbetts, who has teamed up with Norwegian hardanger fiddler Knut Hamre for an intriguing and impressionistic set.  The recording called Å (Hannibal 1438; 53:46) is a lateral follow-up to Tibbetts' cross-cultural rendezvous from 1996, on which the guitarist found paths of emotional resonance with Tibetan nun Choying Drolma.  The cultural turf is different here, of course, but the hardanger fiddle tradition--with the beguiling drone of its sympathetic strings beneath the melodic strings--shares with Tibetan chant a modal, meditative character that Tibbetts complements nicely.

No great change occurs in the signature approach heard on Tibbetts' discography so far, with atmospheric-yet-engaging brushwork on electric and acoustic guitars. His is a paradoxical style: in Tibbetts' soundscapes, nothing is sharp, but nothing vague. On the new recording, done in a suitably reverberant church in Norway, longtime percussionist collaborator Marc Anderson and bassist Anthony Cox add to the mix, but the real point of focus is on Hamre's haunting hardanger fiddling. The instrument's unique sound, underscored by the droning timbral swirl of sympathetic strings, speaks in a dialect all its own.