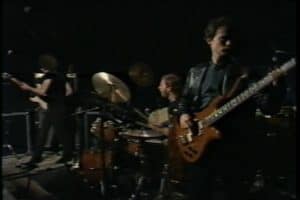 Tibbetts and Evidence, Two Truths on One Stage

Ottawa--Two trios, two styles, two eras, two truths.  Last night, on the summer stage of the CNA, two trios performed at the Jazz Festival of Ottawa, two trios diametrically opposed to one other.

Appearing last, SteveTibbetts' trio played before a crowd that was a bit surprised but delighted by a type of performance unusual for the Ottawa Festival--a performance given by a guitarist about whom they knew very little.

This thirty-two-year-old self-taught musician, from Minneapolis has recorded for the ECM label, a fact that already tells us a lot about his music.

Last night, with Marc Anderson on percussion and Bob Hughes on bass, Tibbetts made music into a transcendent reality. Soaring and electrifying, Tibbetts’ music is occasionally reminiscent of Oregon's. Bewitching…

A bit difficult to grasp at first, Tibbetts' style takes hold gradually, like the stars appearing in the sky at nightfall. An electric guitar that assaults the ears is replaced by an acoustic guitar that soothes the heart. Barely melodic, the pieces draw a constant rhythm from the percussion. And what a wonderful percussionist there was, playing the tabla, the small Indian drum that reminds us of the force of water! Moving from congas to traditional trap set, to gong, to triangle--even to a vase--the percussionist created a foundation for Tibbetts' music, as the guitarist wandered ceaselessly from one to another of his many instruments.

Finding his origins in a myriad of musical influences, Tibbetts is at ease playing a musical suite that is both dense and intense, that seems disconnected, but that forms a precious whole. The small, “innocent” melodies that sometimes begin a piece become menacing, but eminently interesting. A beautiful sensitivity displayed by this trio, a contemporary truth…

The other truth of the evening, avant-garde this time, was that of Theolonius Monk, astonishingly rendered by a Montreal trio called Evidence, with Pierre Cartier on bass, Jean Derome on saxophone and Pierre Tanguay on percussion.

Playing so much Monk is a bit of a risk! Reviving the classics of the bebop era is as demanding for the audience as it is for the musicians.

Evidence has about forty Monk compositions in its repertoire, pieces demonstrating Monk's conceptual rigor and his characteristic humor. Yesterday the three musicians also demonstrated a rigor in executing the music. On sax, Derome is a strong player who knows well how to explore Monk's universe. As an ensemble, they clearly respected the provocative spirit of the music's creator. 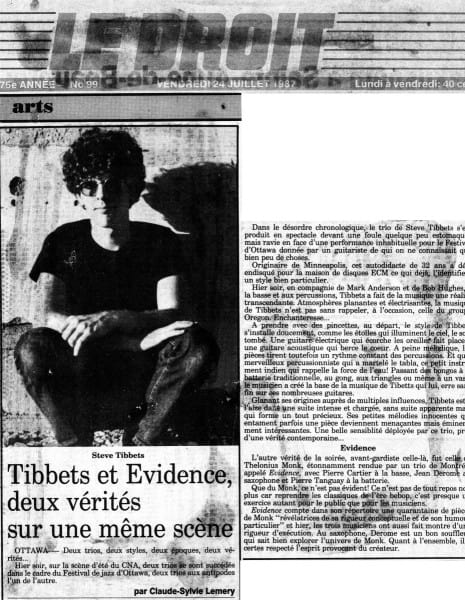