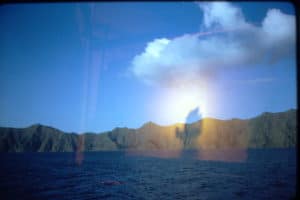 The sound of Steve Tibbetts's guitar music is unique—one need hear only a measure or two of his new album to identify the distinct tang of his playing. Common wisdom is that a guitarist's sound is in the hands and fingers, but Tibbetts has another trick: his weathered, 50-year-old Martin D12-20 12-string acoustic guitar.

As Tibbetts was growing up, his father drove around Wisconsin teaching labor law. "When he'd break out his 12-string at a meeting of tired union Boot and Shoe workers in Stevens Point, everyone would perk up," Tibbetts explained to me. "Guitar is an attention-getting device. They'd sing from the Joe Hill songbook, or whatever passed for an AFL songbook.

"I came home from college some winter break around 1978 and saw the guitar in its case, propped up against the shoe rack in the front hall of our house," Tibbetts continued. "I stamped the snow off my boots and said, gesturing to the guitar case, 'Hey, you should let me take that back with me!' I was kidding. Ten days later I was putting on my shoes, getting ready to leave, the guitar in the same place. My dad was leaning over the railing again, hands clasped. He gestured at the guitar with his chin and said, 'Take it.'"

It's important to note that, after all those years of wear, the metal frets and the wood between them along the guitar's neck were worn down so far that pressing hard on a string pushes it out of tune, until you let it up a little again. Listening to Life Of, I picture Tibbetts's fingers as strong, fleshy, gecko-like digits that can grab the pairs of steel strings and deform them slowly in all directions, producing subtle acoustic flanging and chorus effects as he pushes and pulls. "I like the physicality of playing 12-string," he said. "I don't use a pick. If I'm drifting off to sleep at night and feel my fingertips throbbing, I know I had a good day."

Tibbetts has also learned to resist changing his strings, letting them age until the bright edges wore off. "Sometime in the '70s, a friend of mine (and Leo Kottke's sound man) called me up and told me to come over," he recalled. "He had Leo's guitars in his front hall. 'You can play them if you're careful.' I zoomed over. The action was very high on the two 12-string guitars, and the strings were dead. It sounded like Leo. I decided then and there that I would make dead strings my sound. If you get used to the bright, ringing tone of new strings, you'll have to change them all the time. Dead is better."

But all of this would amount to little more than neat gimmicks were it not for Tibbetts's ability to play in unexpected ways, to sound unique and exotic and, at the same time, comforting. Unlike some of his more electric and frenetic albums of past years, Life Of, coming eight years after his last record, Natural Causes, never strays far from its center of acoustic guitar or piano, with sparse layers of carefully placed percussion, cello, and other artifacts floating around the capacious soundstage.

The compositions are modest in length, each named for a friend or family member. Not songs per se, they pour forth slowly like careful meditations, or a deep fog moving over a range of tree-shaded mountains. That last sentence might suggest new-agey syrup, but Tibbetts's approach is too intelligent, textured, and idiosyncratic for that characterization. There are no repeating patterns or gratuitous dynamic builds—instead, you feel Tibbetts trying to gently reach inside the guitar to pull out every ounce of detail and meaning as a piece develops. He later flavors and spices the tracks with his confederates' contributions, to further bring out the embedded intent.

Those confederates are Tibbetts's longtime companion Marc Anderson, on percussion and handpan, and new collaborator Michelle Kinney, who provides sparse cello and, per her liner-note credit, "drones." Kinney has performed with many jazz legends, including Henry Threadgill and John Zorn; here she provides deep backdrops for Tibbetts's sinewy, sweet-and-sour guitar lines. I imagine this trio quietly sipping green tea together, getting their breathing in sync before trying another take.

Tibbetts primarily records in his self-built studio, using two microphones, a Mojave and a Neumann, set up to record an acoustic guitar. "They haven't moved in years. Using an unmatched pair seemed like the right thing to do. The Mojave worked well at the 12-string's sound hole, the Neumann made a home looking at the 12th fret." He also resists EQ or compression, the tradeoff being that "the music can sound a little dull, like the speakers are wrapped in muslin. I tried jacking up the treble, like everyone seems to do, and it just sounded screechy and annoying."

As he's done in the past, Tibbetts recorded the subtle reverb on Life Of in a concert hall. "Nobody will ever be able to tell the difference between digital reverb and this hall, but I thought it would be worth trying again," he said. In the photo of the setup he sent me, two Bowers & Wilkins bookshelf speakers sit center stage in the empty venue, with microphones farther back in the room. "I set a Neumann and a Mojave mike at the back of the room," Tibbetts wrote, "along with a pair of AKG 451s in an ORTF pattern in the middle. I also played the mixes live in the hall up an octave, recorded the hall's sound on new tracks, then pitched that reverb back down and mixed it with the music, to get long tails at the conclusion of songs."

This mannered approach has resulted in a soft, glowing sound that manages to capture plenty of detail and character across a deep, wide soundstage. Some moments—as when Anderson adds a deep drum pulse, then moves to a hazy wash of cymbal—will flex your speakers or headphones, and add just the right amount of grunt to keep it interesting.

ECM is not a label much known for humorous album covers, but when I saw the press release announcing Life Of, I burst out in an involuntary laugh. It's a photo of a night scene in which the reflective tapeta lucida of the eyes of dozens of cats are brightly lit—a reminder that, out in the world (and on the Internet) there are often many observers, quietly watching us from the dark. I picture Tibbetts traveling the globe, unseen and quietly taking notes, then sending his perceptions back to us in sublime recordings such as this.—Jon Iverson