From 1985-1997 I worked occasionally for the Naropa Institute Study Abroad programs in Nepal and Bali.  I spent autumn in Nepal and spring in Bali.  It was good seasonal work, free travel, and the opportunity to observe things that would cause me to pause and say to myself, “I can’t believe I’m actually seeing this.”  When that job ended I organized some excursions for like-minded travelers to interesting spots in South Asia.

Some of the photos in the Hellbound Train package come from these trips.  Our groups circumambulated Mt. Kailash, walked to Lapchi at the Nepal/Tibet border, and failed in an attempt at a technical climb of Mt. Ramdung (I was the weak link).  We made it past the glacier icefall and made high camp, but that was as far as we got.

While crossing Mt. Kailash’s Drolma-La pass we decided our group’s company motto would be “Hard Travel to Airless Places.”

The Places in the Booklet Photos 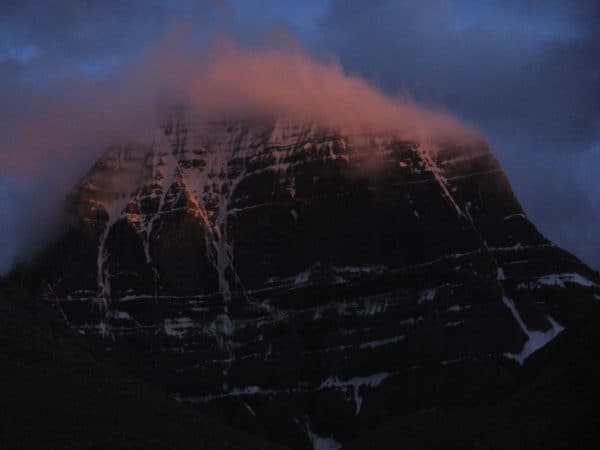 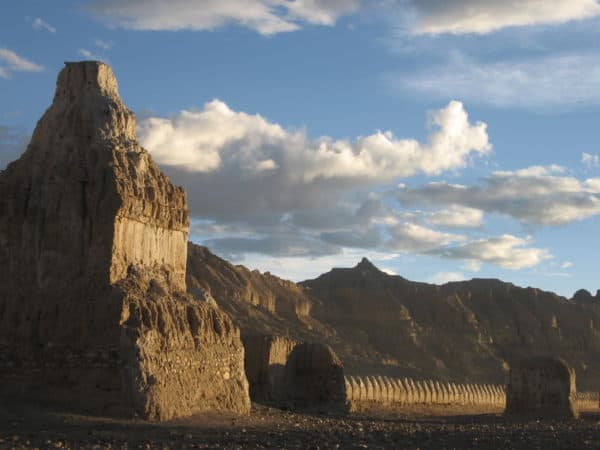 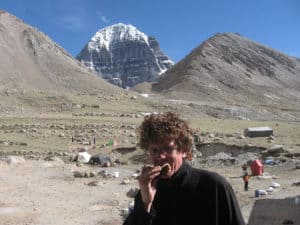 Breakfast before hiking the Drolma-la pass

Years ago I was in the ECM office chatting with designer Dieter Rehm about photos we might use for the cover of Exploded View. He asked me what images I thought would work with the music.  I suggested we find something intense or wrathful.  Something angry.  Dieter shuffled through a pile of photos and pulled out a photo of a dog in a car, lunging towards the rear window, snarling, teeth bared.  We both laughed.  The photo was taken by a friend of his who just happened to have a camera while he was walking through a parking lot.  The photo was not quite right for that project, but I decided that whenever I witnessed a dog in attack mode I would try to take a picture.  (Do not do this.) 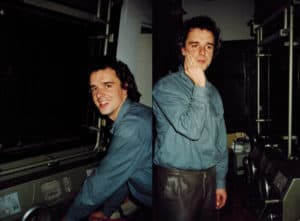 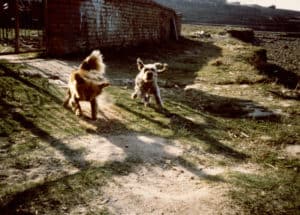 Dogs (not) happy to see me

The two dogs in the booklet photo lived close where I was staying in Boudha, Nepal.  When they’d see me approaching they would get up from their naps, stretch, yawn, and then run towards me, barking madly.

Our encounters became part of their (and my) daily routine.

I continued this photo project in Indonesia.  In  Ubud, Bali there was a dog who would get upset every day when my wife and I walked past his post at a temple gate.  His (her?) picture adorns the back of “The Fall of Us All.” 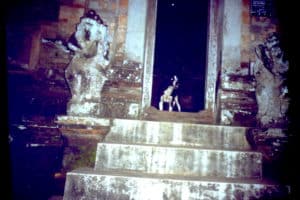 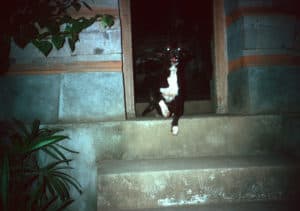 Fall of Us All dog

My angry dog photo project traces its roots to a chance meeting in the ECM office and Dieter’s sense of humor.

Side story:  In Nepal, during the Kukur Tihar festival, street dogs are considered to be the messengers of Yamaraj, the god of death, and are given baths and tikas of red sindur on the forehead. 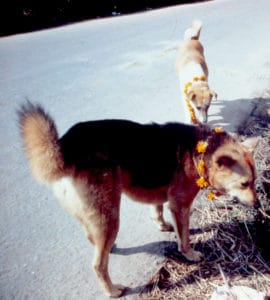 On one particular day of the festival dogs are garlanded with marigolds.  (Do not try to garland Kathmandu street dogs with marigolds.)  At night, when the streets of Kathmandu belong to the dogs they continue to roam about in packs in their usual flanking formation, (alpha canine at the apex of the “V,” subordinates to the left and right).  During the night of Tihar they are still wearing their glamorous adornments from the day, resplendent in flower garlands and red tikas.  On one of those evenings I tried to take a photo of an approaching pack of dogs, proud in their sindur and marigolds, but they were startled by the camera flash and picked up their pace towards me, eventually howling and barking in hot pursuit.

End of shift: Ubah and Steve

My day-to-day life is routine.  I get up, drink coffee, talk to my wife, go to the gym, go to my studio, come home, drink one beer, read, and go to bed.  I work occasional weekend shifts as a nurse.  That job began in a somewhat random fashion:  I took an interest in palliative care when my mother died, took some courses at St. Paul College, and obtained an LPN license. The work is hard, but the money is good.  My part-time weekend shifts began when the pandemic started. My boss said, “You could not have picked a stranger time in the past 100 years to begin working this kind of job.”

At my studio I’ve unearthed about 60 minutes of live tracks and oddities that I may release later this year on my long-dormant Frammis label.  I’ve got about 50 minutes of promising new music in the works that could be done in a year.  Or two.  (Maybe three.  Problem: the better the music gets, the slower I work.)

Our Hard Travel to Airless Places (HTAP) travel group may do some more hiking, but nothing as arduous as Kailash or Ramdung.  There are places in South Asia that require walking, and while our legs are still working we’ll try to get to the volcanos in east Flores, climb Mt. Rinjani in Lombok, trek to Daklha Gampo, and walk to Drakar.

Some years ago I sent Manfred a book about Dmitri Shostakovich and his struggles with Russian politics called “The Noise of Time.”  He read it and called me up to say, “Great book.  We must record acoustic guitar in Italy. I know a studio in Lugano with fantastic wooden walls that would make your guitar sing.”  That sounds like a good idea.  It could happen.

It would be fun to play in someone else’s band.  That was my intention in 1967, but the phone wasn’t exactly ringing off the hook. 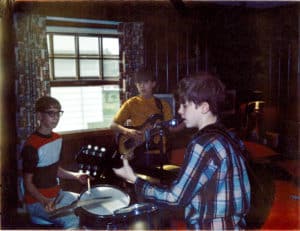 I sent my second album, “Yr,” to every company I could find, all over the world.  A few A&R reps wanted the album, but their offers were lukewarm or just sort of strange.

Annoyed, I photocopied all the rejection letters and used a scissors to cut out the best bits, making a William S. Burroughs-styled cut-up rejection letter.  I sent that out as part of my press kit to writers and radio.

Rich Frank, a college radio music director in California, sent me a letter saying, “You should definitely send a copy of ‘Yr’ to ECM in Germany, and one to ECM’s representative at Warner’s, Ricky Schultz.  Don’t forget to include your rejection letter compilation.”

I was already a rabid fan of the label (here’s the playlist called “My ECM”).  Dutifully, I packed off an album to Ricky.  Ricky called and said he was heading to Munich for a meeting with ECM’s staff and would personally put my album in Manfred Eicher’s hands.  He did so.  That was followed by a letter from Steve Lake, another from Meredith Breitbarth at the New York office, a call from Manfred, and finally a letter from Hans Wendl, confirming our recording dates for “Northern Song.”  In his letter Hans wrote, “Welcome to the ECM family.”  It’s felt like a family ever since, in every sense of the word.

(In “Horizons Touched” Steve Lake wrote that I was one of only three artists who have been taken on by the label on the basis of an unsolicited demo tape or album.  Who are the other two?  I don’t know.)

A few months after Hans’ letter Marc Anderson and I found ourselves in Oslo, recording “Northern Song” for ECM with Manfred Eicher.  I had intended a tape loop symphony to accompany the congas and guitar for the final 10 minutes of side two, but the congas dropped from a pattern of repeating major seconds to minor thirds, meaning that the loops I had prepared would result in a cacophony of minor seconds, 7ths, and tritones.  I was upset.  Manfred said, “Steve, if more loops came in now, again, it would just be too much.”  Now, after 40 years, I mostly agree with him.

In 1984 I sent a copy of “Northern Song” to Bill Douglas, head of the music program at the Naropa Institute in Boulder, Colorado and said, “If you want to hire me to teach anything at your summer session next year, count me interested.”  Other ECM artists had taught at the Naropa Institute’s summer session and I thought I might be able to teach there as well.  Past ECM faculty had included Colin Walcott, Meredith Monk, and Ralph Towner.  Bill called and said, “I would definitely put you on the summer faculty, but we have the entire band Oregon coming to teach.  We’re set.”  About two months later he called me, weeping.  “Could you come and teach next June?  Colin died last week in a car crash.”  I started working for them during the summer of 1985.  That autumn Naropa hired me to work for their first study-abroad program in Kathmandu.

I wish I could have met Colin. 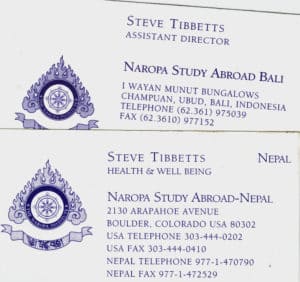 The ECM connection that got me a job teaching at Naropa led to my study-abroad job with the school, and opened the door for me to travel all over the world.

I kept on, and ECM and I kept on.  Album to album.  The  ECM staff and Manfred and I have gotten along well now for 40 years.  I like to visit the office in Grafëlfing occasionally; Manfred hires people who have a certain view and aesthetic I admire.  I forward birthday greetings from odd corners of the world and even sent Helga New Year’s greetings (password TechnoMarkt) with help from a fox. 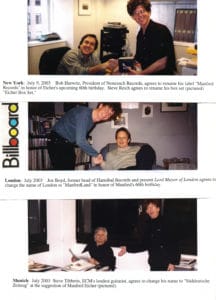 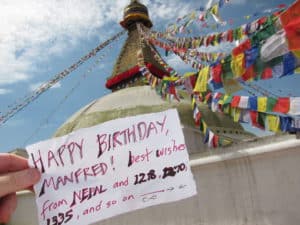 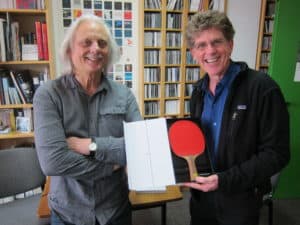 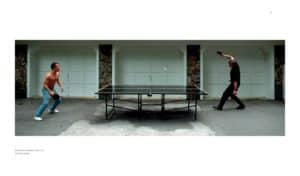 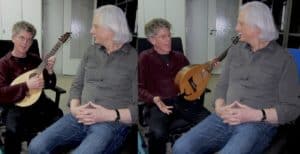