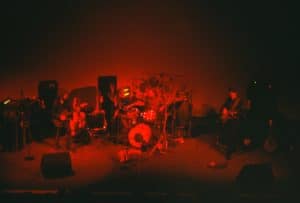 He lets his fantasies out of the closet on his third and most aggressive album for ECM. Unlike most heavy-metal guitar freaks, Tibbetts does it with impeccable taste and economy.

Side 1 of Exploded View may be heavy-metal at its most elegant and most ethnic.  Ethnic elements, rendered by percussion and guitar, are again the foundation of Tibbetts’ project.  But he allows his guitar to screech and moan over the spacey ethnic backdrop, with Claudia Schmidt and others contributing an occasional chant to underscore the ethnicity of this mostly instrumental music.

Overall, 33-year-old Tibbetts demonstrates a fine understanding of space, free-form composition and guitar vocabulary.  He also has an unusual ability to take listeners on a musical world tour in his St. Paul studio.  It’s a furious itinerary despite the calmness of the compositions:  on every selection on Side 2, he takes listeners to more than one continent in a span of minutes.

Despite the disorienting pace and polyethnicity, it’s invariably a fascinating journey with Tibbetts as guide.