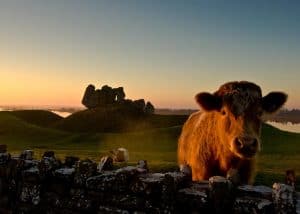 During a recent phone conversation with Twin Cities multi-instrumentalist and composer Steve Tibbetts, I wondered aloud about the emphatic aggression that has lately crept into his sound. Tibbetts’ response was some vague speculation about bovine growth hormone. Whatever the reason, this man’s musical teeth seem to be getting sharper and sharper.

For The Fall of Us All, Tibbetts has rounded up his customary cadre of percussionists and vocalists, including folk singer Claudia Schmidt. This sound has an urban, ritual feel that is sinister, foreboding and primordial. Tibbetts, whose primary instrument is the guitar, comes out the of Robert Fripp/David Torn/Adrian Belew school of lacerating electric guitar chops. He uses them to create ceremonial instrumental music that could easily service to serenade a war party convened to ride into the night and repossess automobiles or to hold up liquor stores.