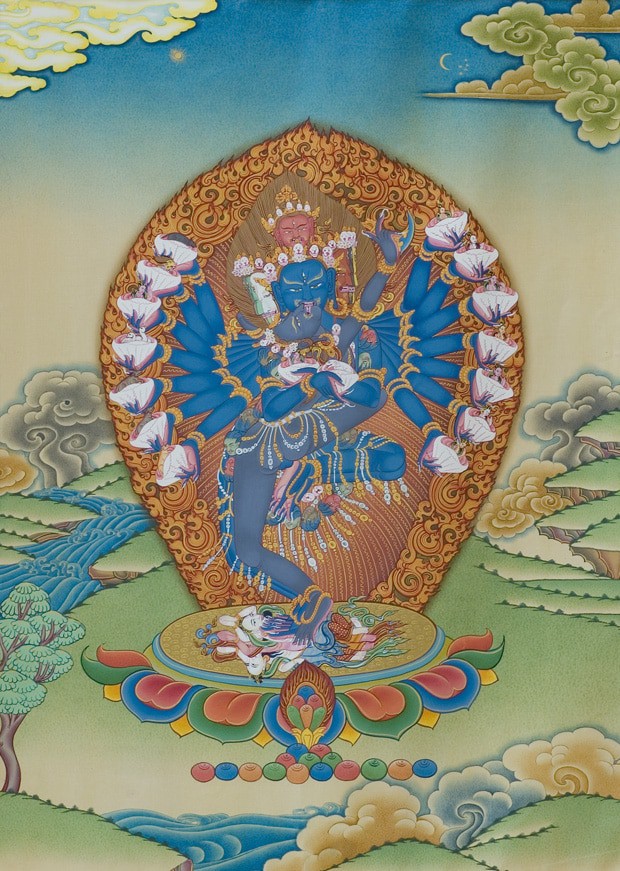 Siddhartha Gautama, the historical buddha, maintained that he was neither god, deity, or superman, but simply a human being who had chosen, through his own efforts in meditation and analysis, to awaken. Thus the title “Buddha”, “one who has awakened.” He did not claim to be a god and he has never been regarded as such by Buddhists. In his 45 years of teaching he codified a system of study and meditation that would enable anyone with sufficient inspiration and diligence to awaken as he did. At his death in Kushingar at the age of 80 he did not appoint a successor. Instead, his final words were, “Monks, all compounded things are subject to change. Diligently work out your own salvation.”

Over the next twenty-five centuries his followers took him at his word, finding illumination in the monastic system set up by the Buddha, in solitary retreat, or in the life of a wandering yogi or yogini. His followers spread across the length and breadth of the Indian subcontinent and eventually to the north, where the tradition took root and developed at its own pace behind the forbidding wall of the Himalayas.

The Buddha taught non-self, anatman. All objects that can be encountered or taken up by the mind are, while appearing clearly, devoid of inherent self or essence. All things arise dependent on causes and conditions, are multiple in nature, and are impermanent. They are shunya, empty of a permanent, single, and separate nature. Thus, all phenomena, inner and outer, mental and physical, have no inherent essence or existence. They merely appear. The true nature of phenomena places them beyond the extremes of existence or non-existence. The true nature of phenomena is luminosity, selwa, the unity of appearance and emptiness.

The cessation of ignorance and suffering becomes manifest in dependence upon meditating with knowledge of reality’s precise nature: interdependence, multiplicity, and change. The notion of emptiness does not contradict the appearance of phenomena. Indeed, without the possibility of change nothing could come into existence to begin with. From within shunyata, the great variety of dependently arisen appearances manifest.

Vajrayana or Tantric Buddhism takes shunyata and the mind’s inherent tendency to arise as emotion, thought, or imagery as its base of practice. Seemingly arcane concepts such as non-self, compassion, or enlightenment can be personified in the form of a deity or mandala. In this way the constantly moving mind can settle into contemplation of a formerly elusive object of meditation. “Clarity” or “compassion” for example, might appear as a peaceful deity, as a wrathful deity, or as a multi-armed couple in union.

The pantheon of deities in the Tibetan Buddhist tradition does not contradict the fundamental Buddhist tenet of non-theism. These deities are never seen as anything but the spontaneous expression of one’s basic enlightened nature.

In the end, the manifestations of deities are seen as temporary steps on the path to awakening. Just as a raft is left in the water once one has crossed a river successfully, all conceptual invention is left behind once it has served its purpose.

Each practitioner has had to resolve the seemingly contradictory truths of appearance and non-self through the hard work of study and meditation. Thus, Buddhism is not a religion that hews dogmatically to the words of a founder; it is a way of being that only comes alive as one’s insight and meditative stability matures. Even today, the example of a living teacher is generally considered more apropos to one’s life situation than the words of the historical buddha.

In the dawn of hard-won clarity, practitioners may turn to acknowledge the long line of teachers, yogis, retreatants, and householders who have gone before them. This is the bedrock of lineage; a tremendous appreciation for those who have taken on the great task of awakening themselves. This gratitude is naturally expressive; it can find form as a deity, a poem, a text, or a song of longing and devotion.

Here is the sacred Jumna and here the River Ganges,
Here are Prayaga and Benares, here are Sun and Moon.
I have visited in my wanderings shrines and other places of pilgrimage,
But I have not seen another shrine blissful like my own body.

“Buddhism is the only religion that doesn’t promise anything. Only suggests we work with ourselves fundamentally.”