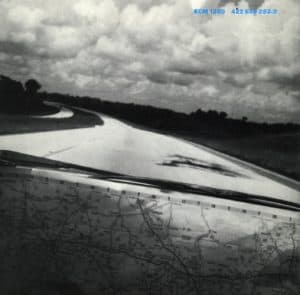 Steve Tibbetts is perhaps one of the most overlooked art­ists recording today.  I encoun­tered his work only a few short years back and have been held captive by his wide range of mu­sical ideas ever since. This is Tib­betts' most personal album yet.

He plays guitars, dobro, kalimba, pianolin and tapes, with help from his long-time musician­ friend Marc Anderson on percus­sives (including congas and steel drums) and Marcus Wise and Michelle Kinney on tabla and cello, respectively.  Musically, this album stands in complete contrast to his last release, Ex­ploded View, as where that al­bum was dynamic and grand, Big Map Idea is a private, sub­dued piece, both intimate and warm (Side One's reworking of Led Zepplin's "Black Mountain Side," although remaining close to the original, gives the sound added dimension and feeling).

Listening to Big... gives one the impression that Tibbetts has an uncanny ability to mesmerize by his technique alone, a gentle and delicate interweaving of in­struments.  He doesn't succumb to the "play a million eighth notes per measure" theory or dazzle us with self-gratifying guitar-hero licks (although there's no doubt he could).  Instead, Tibbetts' mu­sic is honest, heartfelt, and un­pretentious; a relaxed, unhurried state of mind is all that's needed to fully appreciate the album.

The wonderful "3 Letters," the album's last cut, is the most complex and exotic of his works, lifting sounds sampled from Nepal (dogs, children, and street noises) and combining them with the music of remarkable genius.  The piece blends into a satisfy­ing whole yet still remains pure; that his music is so soft and hu­man in a business where obnox­iousness usually rules puts Tib­betts in direct conflict with the rest of the world. Alas, records as special as this one are on the way out and in danger of being deleted from the ever-shrinking vinyl catalog...

Even If guitar-tabla workouts aren't your bag, you should still buy this album on its sonic mer­its alone.  A considerable amount of detective work uncovered why this ECM record sounds better than all the rest.  Big.. was re­corded in Tibbetts' hometown of St. Paul, Minnesota, with the assistance of (and using analog re­cording equipment owned by) Ralph Karsten of Atmasphere amplifier fame, whereas the other ECMers are required to record digitally in Norway.  The micro­phones used here included Kar­sten's prized Neumann U-67s, and no noise reduction or digital processing (save for the delay units) was used; in addition, Tib­betts used a pair of Stax head­phones during the mix-down.

Yes, it's just like old times--­smooth, natural sound that's so pleasing, you'll be pulling this one out for demos.  Tibbetts' acoustic guitar is never bright or piercing, and the tabla nuances are perfectly displayed, showing just how versatile the instrument can be--from soft-finger-pad­taps to robust, full-bodied thumps.

In short, the sound here is about as fine as you're likely to wish for:  I rate Big Map Idea at the top 0' the heap, sonically.