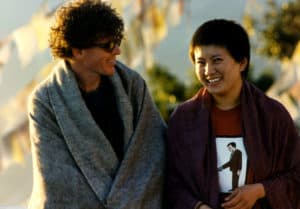 A TRULY SUCCESSFUL musical col­laboration requires that everyone approach the project with an open mind and the willingness to listen deeply.  Egos must be checked, in service of the greater whole.  On Selwa, a Tibetan nun and American guitarist grant each other the space to move freely through their respective disciplines, and the result is a lesson in listening for anyone who is fortunate enough to come across the album.

Born in 1971 in Nepal, Choying Drolma began her Buddhist education at thirteen under the guidance of Vajrayana master Tulku Urgyen Rinpoche at the Nagi Gompa nunnery on the northern slopes of Nepal’s Kathmandu valley.  (Tulku Urgyen was known for his equal treatment of nuns and monks, a rare practice for a lama of his stature in the male­-dominated culture of Tibetan Buddhism.) The precocious Drolma rose to the status of chant master shortly after entering the nunnery, later becoming her teacher’s personal attendant until his passing in 1996.

The year after Tulku Urgyen died, Drolma met a Minnesota guitarist named Steve Tibbetts.  A globetrotter known for his luminous recordings for ECM Records, Tibbetts had been fascinated by the music and cadence of the Himalayan region ever since his first visit to Nepal in 1985.  He recorded Drolma at Nagi Gompa, accompanied only by a click track for tempo, and returned home with the tapes to produce Chö with the help of percussionist Marc Anderson.  The result was a richly textured album far superior to any “East-West fusion” that had come before.

Seven years after their stunning debut, Tibbetts reunited with Drolma in Kathmandu to record Selwa (meaning “clear” or “awake”) for Six Degrees Records.  Selwa is a tempered, minimalist retouching of one woman’s sacred music, backed with light guitar flourishes and intel­ligently enhanced percussion.  At first listen the lightness of being is unavoidable: Drolma’s polyphonic melodies married to Tibbetts’s sweeping orchestral suites provide a sonic landscape for contemplation and quietude.  When one dives deeper into lyrical translation, however, a whole other dimension unfolds.

“Palden Rangjung,” for example, with an abstracted rhythmic lilt and nearly gothic drone, plays a minor key against Drolma’s resonance, her tone working above the repetitive hammering of percussion to add a clear layer amid seeming chaos.  The lyrics invoke the wrathful and just feminine energy of nature and humanity as embodied by the pro­tective goddesses of Indian and Tibetan mythology

Powerful blood drinker, glorious vitality
In the land of Yama, you are Ekajati
Fire eater, blood wearer, wearing the
naga emblems
Kali, the Blood Dripper, I praise you.

In the devotional “Vakritunda” and the nine-minute lullaby “Song of Realization,” Drolma’s voice fades in and out of Tibbetts’s musical architec­ture, inviting the listener to medita­tion.  “I do not recognize me to be me,” Drolma sings in the latter, and one realizes language need not be a barrier to feeling her songs.  The listener and the listened-to meld inseparably.

Throughout the record Drolma’s voice is the showcase, and Tibbetts makes no mistake on this point.  He often keeps his guitar silent and gives Anderson free range on various forms of percussion, filling out the background with reverberating orchestrations of drones and synthesizers.

On the predominantly instrumen­tal “Mandala,” Drolma’s voice forgoes lyrics for echoing howls.  Moments of exaltation are wrapped in melancholy; grandiose pleasure touches silent reflection; the entire song moves like a lifetime in seven min­utes.  As the title suggests “Mandala” is an album unto itself.

Many fusion projects seeking to unite East and West fail by demand­ing too much of one or the other.  On Selwa, Tibbetts uses meticulous care not to impede or demand.  Drolma’s vocals draw you in, and with multiple listens the complete landscape becomes clear.  Few col­laborations have said so much with so little.

Derek Beres is a journalist and DJ.  He is currently writing “Global Beat Fusion,” a book about the new world mythology being created by global electronica.