In 2007 Joe Boyd asked me and local scribe Marty Keller to interview him at the Cedar Cultural Center as part of a promotional tour for his book White Bicycles. (Joe’s an old friend and a cultural icon; you can read more about him here.) Joe asked me to play a song or two to start the program. 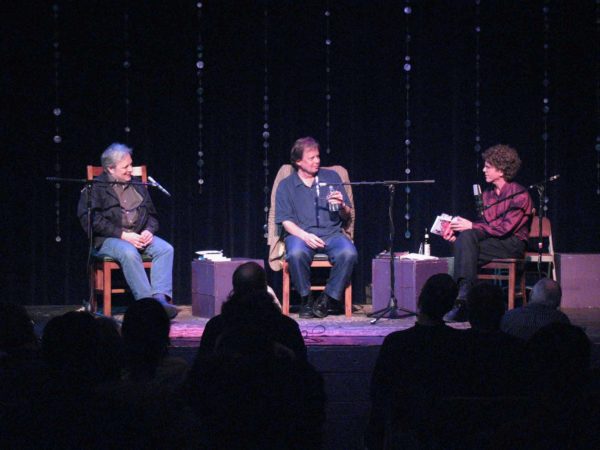 The first time I saw Joe’s name was during the credits for the movie A Film About Jimi Hendrix. I saw the film with my girlfriend Anne in 1973 at the nearly-empty Orpheum Theater on Hennepin Avenue in Minneapolis. We watched it twice, and studied the credits carefully. The credits said, "Directed by Joe Boyd." In the credits, Joe thanked “Caesar Glebbeek of the Hendrix Information Center in Amsterdam.” I thought, “If I ever get over to Amsterdam, I’ve got to visit this place.”

In 1981 Caesar and I spent a pleasant evening in Amsterdam at the “center,” (his apartment).

In 1991 Caesar wrote me a letter, telling me he was coming to Minnesota in order to do research for his book Jimi Hendrix, Electric Gypsy.  He asked if I could help him run down some Hendrix connections. Finding Buzzy Linhart and Tony Glover was easy.  It was almost impossible to to carry out Caesar’s request to “find Hendrix’s daughter.”  I found her, but her mother was adamant that she not speak with Caesar, or anyone, for that matter.

You can see her picture here: she’s got her father's eyes.

Since there seemed to be an interesting web of Joe Boyd / Hendrix / Minneapolis connections I thought it might be nice to take a run at Hendrix’s “Villanova Junction” for the Cedar Cultural Center event.

In 2009 I did some traveling in Tibet with a group of four Italian mountaineers. We circumambulated Kailash and explored the Guge Kingdom, among other places. At Everest Base Camp we met a Canadian photographer named Michael LaFortune who was on a three-year trip around the globe.

On returning to Lhasa I got an email from Nick Lethert. Nick told me that the influential, brilliant guitarist (and my friend) Dean Magraw was quite sick. Nick wrote that he was going to set up a site to help cover Dean’s medical expenses, and asked me if I could contribute something. A couple of days later I found Michael in Lhasa, we had dinner, and I asked him if he could film me miming “Villanova Junction” on a travel guitar I’d picked up in Shanghai. We set up in front of the Potala Palace the next morning and did some filming.

The reason my head is not in the video is because, besides having an ugly head, I was wearing earphones so I could listen to the iPod recording of the rendition recorded in Minneapolis. You are not hearing the sound of the Johnson Travel Guitar I'd picked up in Shanghai.  You're hearing the Martin 12-string recorded in Minnesota.

After about 10 minutes of filming a crowd began to gather (“...who is this guy, and why are they making a music video?”) We decamped to the roof of Michael’s hotel (the Potala Palace still in the background) and finished there.

Dean is alive and well. He came to our softball game last night, and is more Dean than ever.