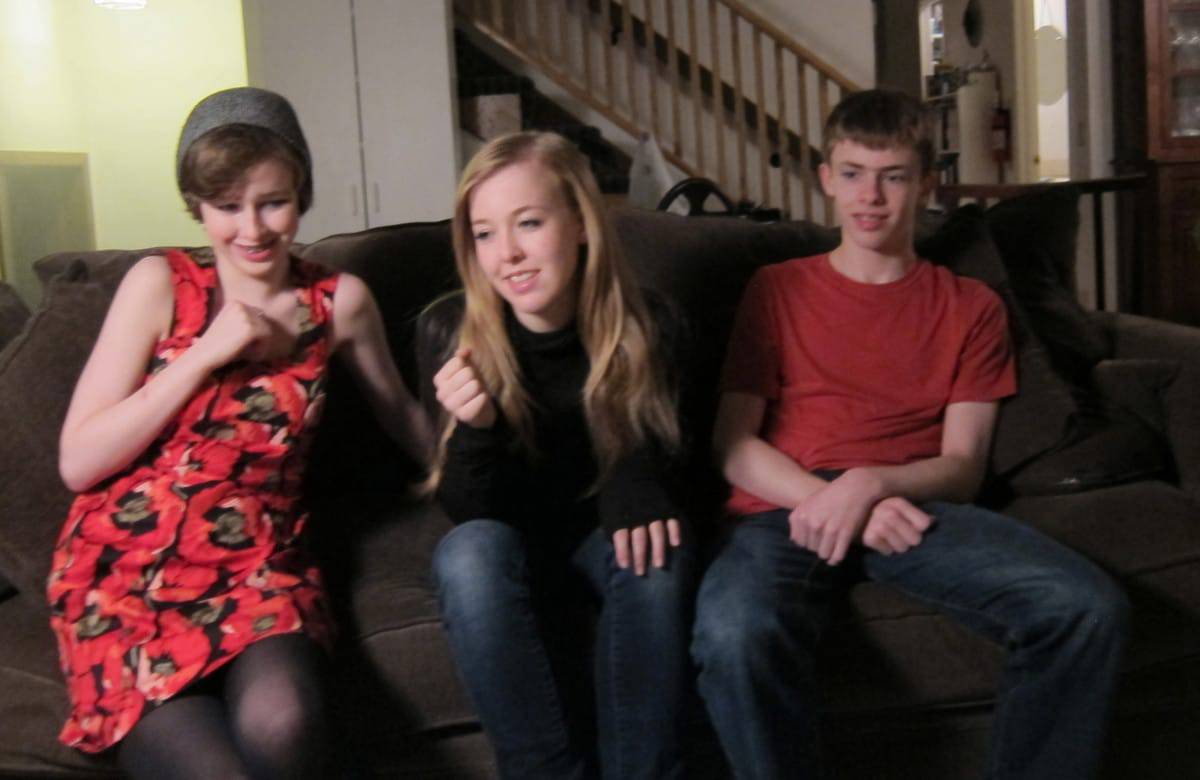 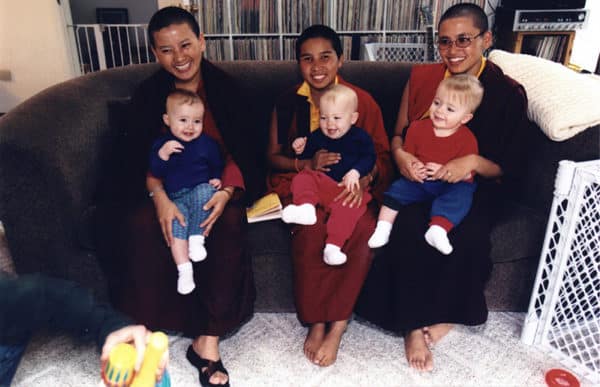 The lead singer sits at a low table on the garage-studio floor. Wrapped in a purple robe, she sings with her nearly shaved head bowed slightly, eyes closed, hands folded in her lap.  Her face shows nothing but calm. Her lips barely move, and at times it's difficult to tell whether she is singing or it's a recording that's being played back.

But Choying Drolma is singing. She sings in a voice clear and true and cello-rich. It is a longing, prayerful voice.

Minneapolis guitarist Steve Tibbetts has toured with alcoholics, crazy people and kleptomaniacs, by his own account. His current tour should be more serene. He's traveling with Drolma and two sister Tibetan Buddhist nuns, aiming toward a homecoming concert Saturday at the Walker Art Center in Minneapolis.

Before the tour started last Sunday, the nuns lived with Tibbetts for several days, helping him and his wife, Joanie, care for their year-old triplets ("They're great baby sitters!" he said), and trying out a few other novel experiences, such as bowling. When the nuns return to their home in exile in Nepal, a nunnery named Nagi Gompa in the foothills of the Himalayas, they'll begin a three-year meditative retreat.  Drolma, 27, speaks English well and idiomatically. (When she told her teacher in Nepal about the invitation to sing in the United States, "he told me to go for it," she said, grinning.) She smiles easily and clearly savors the rush of new experiences. But it won't be a problem, she said, entering a long retreat after this season of music tours, bowling, triplets and ice cream.  "Whatever we see and do here, we do not get so attached to it," she said. "We enjoy it in the moment but will not long for it."

Tibbetts' music has been called evocative, adventuresome, the work of a sound-painter. He collects sounds from around the world.  "It's good to break away from your instrument, to let the calluses fall away," he said in an interview last year in Downbeat magazine, explaining why he didn't record more. "You need to flee from your music periodically to go far away."  Thus he found himself in Nepal in 1993, working with a study-abroad program. He was at a small monastery in the Kathmandu Valley when someone said he had to hear the young nun singing in the monastery's shrine.  Tibbetts took a tape recorder along. "She started to sing," he said. "I was so overwhelmed, I forgot to take the recorder off `pause.' "  He went back the next year and taped Drolma for hours. He brought the music back and played with it, framing the centuries-old tunes with his guitar and bouzouki and other instruments. He experimented with gongs and horns.  He sent a copy of the result back to Nepal as a gift for the nuns. He also sent a copy to a record company, which released it. The album is called "Cho," a Buddhist system practiced by the nuns that might be translated as "Cutting," as in cutting away what isn't necessary. Or as Drolma put it during rehearsal: "Reducing our attachment to ourselves."

JazzTimes called the disc "a magical thing, one of the finest and most mind-opening albums" that Tibbetts has produced. "The real source of enchantment is Drolma's spiritually charged, meditative chants, but Tibbetts brings his ideas from across the world, sometimes adding spatial enhancement or supplying droning underpaintings which set the chants at an angle, harmonically. The result is texturally pleasing and wholly entrancing in a way that surprises anyone skeptical of westernized eastern music."

When she first heard the pairing of her voice with amplified guitars, "I felt something funny," Drolma said. "Here is this spiritual Buddhist tune with some funny Western music. I thought, `Well, maybe this is how Western people like it.' "She consulted her teacher, who endorsed the collaboration.  "He said that through this album, a lot of people in the world will have a chance to hear these precious chords," she said. "They will be liberated for a moment."

Well, maybe partially liberated. Tibbetts made pitch corrections in the recorded vocals and moved things around, dropping beginnings and endings.  "I goofed up the liturgy," he said, casting a guilty look at Drolma, who smiled back. "Now that we're going on tour, she's made it clear that we have to do the whole song - if we want the differential in our van to work."

A school for nuns

Drolma will do more than share "precious chords" on her U.S. tour, which started last weekend in Massachusetts. There and in New York, Philadelphia, Baltimore, Chicago and other stops, she stumps for her dream - a school for nuns in Nepal. "We don't have any schools," she said. "There are universities for monks where they can reach certain levels of education. But nuns, if they want to learn, have to struggle by twos and threes." Nuns could be taught to help people with such things as hygiene and simple medicine, she said. "Now we are limited to praying for people. If we can go out and help people, that would create a better world. I know of many who want to help but have no skills." Such work would not substitute for the nuns' traditional lives of prayer and meditation. "Without our inner practice, we can't do those other things," she said.

Still, she has felt resentment from some monks. "When they say I am a `fighter' [against traditional roles], it sounds like I'm so angry with them," she said. "I'm not so angry. But they don't understand the woman's power of caring and giving."

When Steve and Joanie Tibbetts brought their three babies home from the hospital a year ago, they laid them out and looked at them and said, "Now what?" About the same thing happened, he said, when three Tibetan Buddhist nuns arrived from the airport last month. But everybody adjusted, looking for where they fit. It's the same, he said, with the music. Not everybody applauds the pairing of Eastern spiritual music with Western instruments and technology. Some critics have called it exploitation. Tibbetts bristled when he was asked about that. "The objection rarely comes from practitioners, people who look to their minds and study," he said. "It's usually Western converts - born-again Tibetan Buddhists - who call this exploitation. "Marc [Anderson, his percussionist] and I are exploiting Norwegians next year," he said. That will come in an album of Hardanger fiddle music, which Tibbetts recorded in an old stone church in Norway and brought back to Minnesota for "sonic manipulations," adding jazz bass and guitar - and filtering out criticism from Hardanger purists.

Tibbetts says that he's just following his "lineage," a musical line that began at age 12 when he heard the Blind Joe Mendelbaum Blues Band play distorted guitar at the Dane County (Wis.) Junior Fair. He was overwhelmed, he said, by "the splendor and majesty of it" - and the fact that the band was "very loud."  "I'm a white guy who grew up in Madison, Wisconsin, and listened to Chicago blues," he said. "I went on from there to many musical traditions."The latest, with a splendor and majesty (and occasional loudness) of its own, comes from Tibetan Buddhist nuns who live in meditative exile in Nepal. "It sounds good to me," Tibbetts said. "That's enough. Music at its best always has an awake quality to it, an elevated quality. "The most important things are the original words and the original tunes, and we aren't changing those. With the Western instruments, we're adding some ornaments."

The songs that Drolma and the others brought with them reflect the altruism and self-confidence that are at the heart of Tibetan Buddhism. Some of the sounds will be familiar to people who have heard monks perform in the Twin Cities: harsh and startling horns, jangling bells, powerful drumbeats. "I think some people will be transformed," Tibbetts said. "Others will be irritated. It's really evocative and spacious music.

"And I think Choying's voice is really heartbreaking."