THE FALL OF US ALL 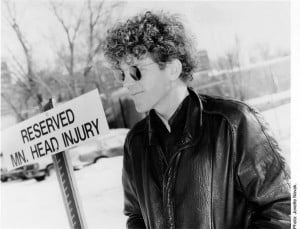 The Fall Of Us All is the sixth ECM recording by Steve Tibbetts; this long-awaited tour de force from theunique guitarist will be greeted with cries of delight and one question: “What took so long?” Fortunately, we have the answer to that and all other questions about Tibbetts and his music.

First, for those of you who don’t know, Tibbetts was born in Madison in 1954; at the age of 12, he heard the distorted guitar of the Blind Joe Mendelbaum Blues Band in the Teen Tent at the Dane County Junior Fair, and “was overwhelmed by the splendor and majesty of it all. They were very loud.”  He has been playing distorted and loud guitar ever since, recording such highly acclaimed albums as Yr, Exploded View, and Big Map Idea, as well as occasionally touring, with long-suffering percussionist / partner Marc Anderson. In between, he has traveled to Asia to study music, bum around, and even work, and this album is the result of that journeying, outlined here by Steve:

1989 Feb-May: Deliver Big Map Idea to ECM, hop flight from Frankfurt to Delhi. Throw up on plane to Kathmandu. India closes Nepal border, (riots force government to chopper out Westerners, first ride on a helicopter piloted by a guy with a green turban). Hitch back to Kathmandu, get ride from Swiss man in Land Rover who gets hopelessly lost. Attacked by dogs in Darjeeling. May: Beat jaywalking charge in U.S.Jun-Aug: Travel with wife-to-be through Thailand, Malaysia, Java, and Bali. Propose to wife-to-be at summit of volcano. Study drumming. Jump off wrong train in Thailand (moving) and out of burning van in Bali (also moving). Monkeys steal wife-to-be’s glasses. More dog attacks.

1991 Jan-Apr: Back to Indonesia. See trances in South Bali. See guy eat light bulb in Java. Apr-May: Tour midwest and east coast. Aug: Canadian tour. Driving truck, tear off gate at tollbooth in Chicago and peel off front of Honda Accord in Montreal. Same night in Montreal, walk up stairs to stage at Club Foufounes Electriques and gash head on lit-up metal sign that says “Dangereux”. Bleed all over self and Strat, causing crowd to go wild.

1993: Sep: Finish The Fall Of Us All and deliver to ECM. Go to Nepal, India, and Tibet with wife. Get out of van after arriving at guest house in Lhasa and hear someone yell, “Hey, Steve, I like your album.” Turns out to be monk gave cassette to in Sikkim in ’89. Survive dog attack near Samye in Tibet.

In Indonesia, Tibbetts was moved by the furious double drumming styles of Balinese Gong Kybar, in ’89 and again in ’91, he studied drumming with I Nyoman Pak Sumandhi, in Denpasar. The endless gong cycles of music in Indonesia fascinated him; “In the course of an eight-hour nighttime performance, one’s ears would begin to hear more and more clearly the long arc of sound that anchors a piece of music.” In Nepal, Bhutan, and Tibet, Tibbetts stayed in or near monasteries, awaking and going to sleep to the sounds of the horns, crashing cymbals, and drums used in the pujas (prayer services). Between travels, Tibbetts “tried to forget what I’d heard and learned, lest the music I was working on become a cheap and all-too-easy grafting of mutually disparate forms.”

The Fall Of Us All is the fourth and last of a series that started with Safe Journey and includes Exploded View and Big Map Idea (“Why not impose order on chaos?”).

Tibbetts began his recording career in 1977 with a record released on his own label, Frammis; this youthful effort was followed by the five-star “guitar freak’s dream” (DownBeat), Yr, also on Frammis originally but now available via ECM. Northern Song was Tibbetts’s first ECM release; the second was Safe Journey. Steve has been joined on all his recordings by percussionist Marc Anderson, who also tours with him. Marc released his first album as a leader, Time Fish, in 1993. On The Fall Of Us All, other contributors include Marcus Wise on tabla, double basses in Jim Anton and Eric Andersen, Claudia Schmidt and Rhea Valentine on vocals, and Mike Olson (synth, Linn).

The Fall Of Us All is two albums; the first six electric songs are one suite, the last five acoustic ones another. (“There’s a lot of electric guitar in the first few songs, probably because we did a fair amount of frustrating touring, and we’re loud when we’re frustrated.”) Tibbetts’s explanation: “It’s a big meal all around, easy to choke on. The best way to listen to it: You’ve got a fine new driveaway car with a top-notch stereo system. You’re traveling cross-country from Ohio to California. It’s 1:30 am and you’ve just finished your greasy dinner at a truck stop in Council Bluffs, Iowa. You drive off. You’ve got a large, weak, and extremely hot coffee positioned between your legs, and you listen to the album between Kearney, Nebraska, and Sterling, Colorado. It needs that kind of captive audience.”

Most reviews of Steve Tibbetts’s music describe it in the context of what it’s not; what it is, plain and simple, is Tibbettsian.