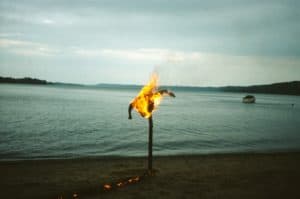 The title is a euphemism for taking a leak, and the album’s a pisser.  Extreme guitarist Tibbetts recorded this wild excursion just prior to undergoing hand surgery, and it has all the urgency of a last blast of freedom. Tibbetts and drummer Marc Anderson spent a couple of days fabricating Asian-influenced tracks, then Tibbetts went “berserk,” as he put it, overdubbing heavily MIDI-ed and effected electric and acoustic guitar over Bali and Buddhist beats and samples. This raging exercise in last-gasp globalization spews scalding post-Hendrixian lava.

I’ve been fooling with audio equipment and auditioning recordings for so long that not much gets me excited anymore. I don’t really care who might have a new preamplifier on the market, nor am I apt to run out and buy any new recording of the Mahler Symphony No.2 that happens to show up in the stores. Yes, I am getting kind of old, kind of tired, kind of jaded – but when a new CD from Steve Tibbetts unexpectedly showed up in my mailbox a few weeks ago, I literally shouted for joy, pumped my fists in the air, and ran up the driveway so that I could get it into my CD player just as quickly as possible.  Whew!  After eight years, a new Steve Tibbetts CD on ECM is something to get excited about, and I was pumped.

The best part is, once I started listening to it, I stayed pumped, because A Man About a Horse is a rompin’, stompin’ name-takin’ recording that keeps the energy level right up there where Tibbetts’s previous ECM CD, The Fall of Us All, had previously pegged the meter.  Tibbetts plays guitar and percussion, and is supported by his long-time sidekick Marc Anderson on percussion, plus Marcus Wise on additional percussion and Jim Anton on bass. Tibbetts has set up his guitar to trigger other sounds through a MIDI connection, and the resulting sound field is dense and multilayered. Played at low to moderate listing levels, the music is engaging and inviting; played more loudly, the music seems to become more intense and dynamic.  Some music seems to have an optimal volume level, but this music seems to expand to fill the volume as the volume increases. Interesting …

Tempos shift, drums thunder, birds twitter, voices drift in and out–is that the wind suddenly picking up, or is it in the recording? Like Mahler’s music, Tibbetts’s music seeks to create a world. I only wish my meager descriptive powers could do it justice. If you have never heard the music of Steve Tibbetts, A Man About A Horse would be a great place to start.