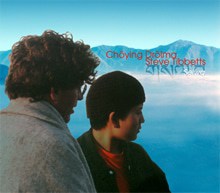 Tibbetts left his hometown so long ago that most local folks who enjoyed his previous – and internationally praised – pairing with Tibetan Buddhist nun Chöying Drolma don’t realize he’s a Madison boy.  Well, he is. And Selwa, which again matches Drolma’s plaintive, highly musical chanting with Tibbetts’ spare prog backdrops, deserves to be snatched up by anyone interested in cross-cultural collaborations. It’s remarkable how deftly Tibbetts adds a snippet of processed guitar or a minimalist percussion track to Drolma’s very serious statements of Buddhist philosophy without diluting them.  “Kyamdro Semkye” is a particularly fine showcase of Drolma’s airy, elastic voice, even if it is brief, while the acoustic guitar-backed “Gayatri” is almost unbearably lovely.  Six Degrees’ press materials point out that both Drolma and Tibbetts indulge their pop interests on one cut, and that’s true. But all of the music here has a devotional tone and is intended, one imagines, for calm contemplation.

Great stuff and a must for those who enjoyed the collaborators’ earlier album Chö.  Now if only Tibbetts and Drolma would return to Madison for a live concert.  Their last one here (which included several other members of Drolma’s order) was among the most poignant live musical events the city has hosted.