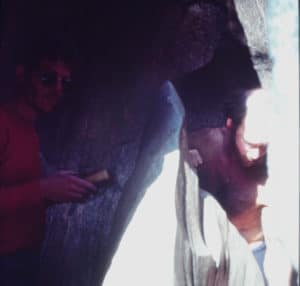 “Northern Song” is not so much a collection of compositions as one of meditations.  There aren’t more than a couple of true themes on the entire album, and they are deliberately, painstakingly deployed and developed.  Steve Tibbetts clings to a musical idea as if it were the last he’ll ever have.  No chord, no note, no harmony is thrown away; each is repeated over and over.

I don’t think I’ve ever heard an album so given over to silence. It stretches out for many seconds at a time, and Tibbetts and percussionist Marc Anderson invade it cautiously. Sometimes the silence is broken only by the murmur of wind chimes or the clawing of a fingernail along a string.

In a sense, this album is an acknowledgement of the ultimate power of silence over music.

Listeners wedded to form and structure and momentum will probably find “Northern Song” unsettling, even exasperating. Those who can allow themselves to be transported in the few moments a struck chord endures against the power of silence should find it captivating.